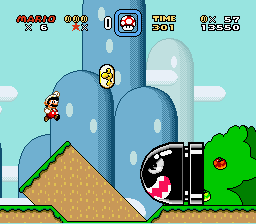 "Vanilla", in the Super Mario World hacking community, means using few or no custom resources. A Pure Vanilla Hack takes it to an extreme and touches nothing other than level data. It's a short hack, only changing the first five levels of the game.

As far as I know, this is the first hack of Super Mario Advance 2 — other than that, is probably the most forgettable hack I've made. The levels here are rather uninspired and nothing to gush over.